Vilnius is one of the cities in The Central Europe, laying the farthest east, which experienced a strong interaction between the Eastern and Western cultures. In 1994 the historical center of Vilnius (old town) was globally acknowledged due to its exceptionality and was included in the World Heritage List of UNESCO. Vilnius’ old town is the largest old town in The Eastern Europe, covering 359,5 ha.

From 14th to 18th centuries the city produced a huge impact on the architectural development throughout the whole region. The city boasts a well-preserved example of a street network and urban structure, characteristic to The Middle Ages. The city landscape has preserved a rich variety of the buildings with plenty of houses in Gothic, Renaissance, Baroque and Classicism styles. One marvels at the mesmerizing panorama and perspectives.

The streets and buildings reflect the signs of living, once led by Lithuanians, Jews, Poles, Russians, Germans, Belarusians, Caraites and Tatars. Here peace reigns among the representatives from different confessions such as Catholics, Greek-Catholics, Orthodox, Evangelic-Lutherans, Evangelic-Reformists, Jews and Muslims. The historic center of Vilnius (the old town) stands for a proof of harmony between a human being and nature.

Vilnius, as the capital of Lithuania, is the home of the President, the Seimas, the Government and the Supreme Court. Diplomatic missions, educational, cultural, financial, research, and healthcare institutions are based here.

For more information about Vilnius, What to see, What to do, Where to eat, Where to shop please visit Vilnius Tourism Information Centre: http://www.vilnius-tourism.lt/en/ 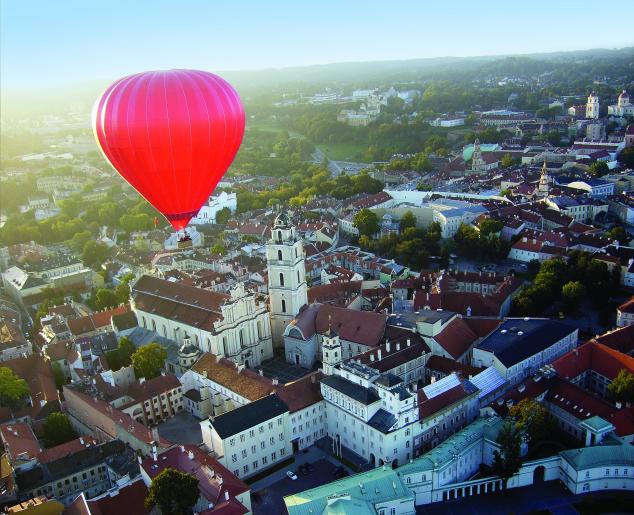 Take a hot air balloon flight and see Lithuania from above! Have an extraordinary sightseeing adventure over the UNESCO inscribed Old Town of Vilnius, beautiful Trakai Castle or other highlights of our country. Just imagine yourself detaching from the ground and getting closer to the clouds…

Vilnius is a perfect city for cyclists. It takes merely a dozen of minutes from almost any part of the city to leave the urban bustle and escape into the retreat of nature – even from the very centre. You can bypass almost the entire city avoidng busy streets, riding along comfortable, greenery abounding traits. Especially it can be said about the route from the Cathedral Square to the Park of Europe. Do not be discouraged if you do not have a bike. In Vilnius, it’s easy to get it – there are a number of bike rental stations, and the city bike rental system operates during the warm time of the year. 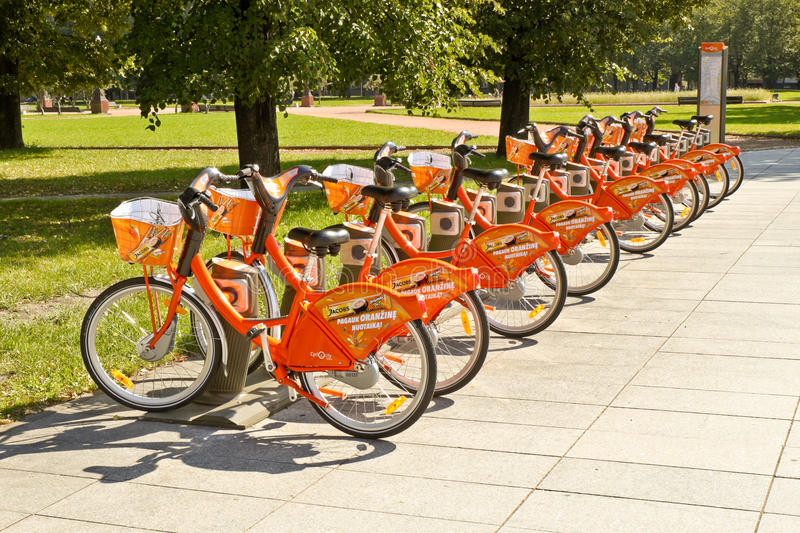 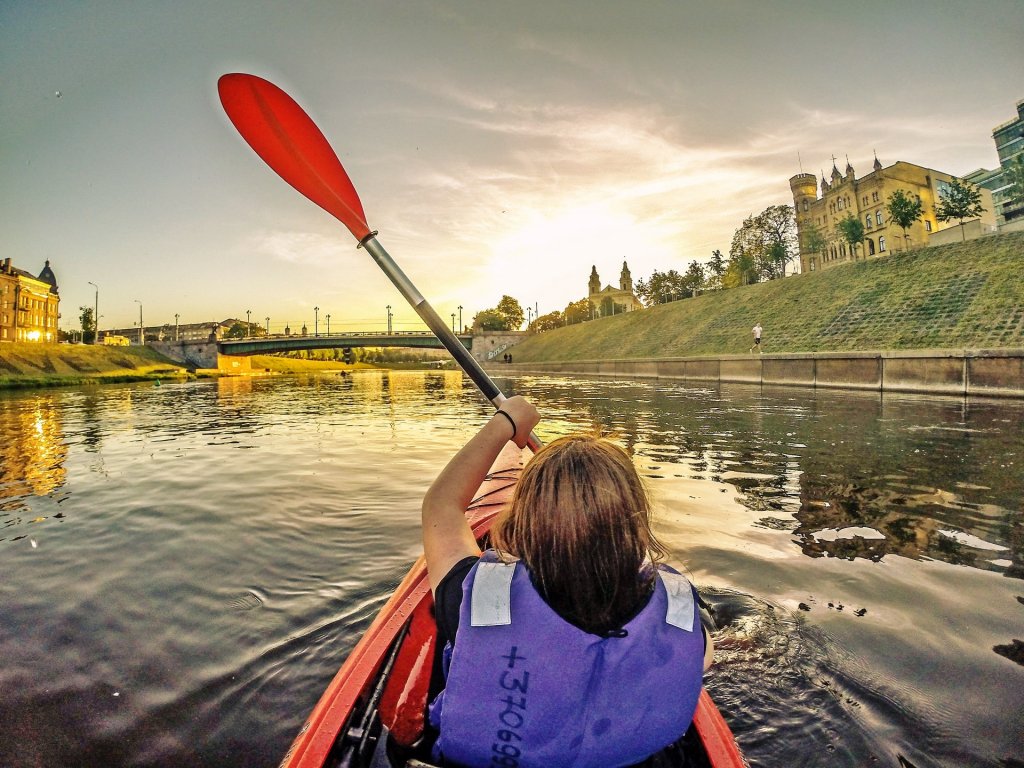 Looking for something completely different to do with your evening in Vilnius? Well here it is!

Kayaking in Vilnele river is designed for the ones who really loves extreme swimming. Vilnele river is filled with large rocks, sharp turns, and fallen trees. Do not forget that the stream of the river is very fast too.

Some say, that the origins of the three crosses date back to the 17th century when three monks placed them there to pay tribute to a group of fellow monks who were martyred in the 14th century. According to the history books, seven monks were killed and seven were tied to wooden crosses and floated down the Neris River, with the instruction to return to the west where they came from.

The monument has changed many times, and the current one was built by the architect and sculptor, A. Vivulskis in 1989 at the beginning of the Rebirth movement. It was built to replace the one that had been removed by the Soviet authorities in the 1950s, pieces of which still remain on the far side of the slope.

Over the years, the monument has changed many times. The current one was built by the architect and sculptor, K. Šilgalis in 1989, when the Soviet Union began to collapse. 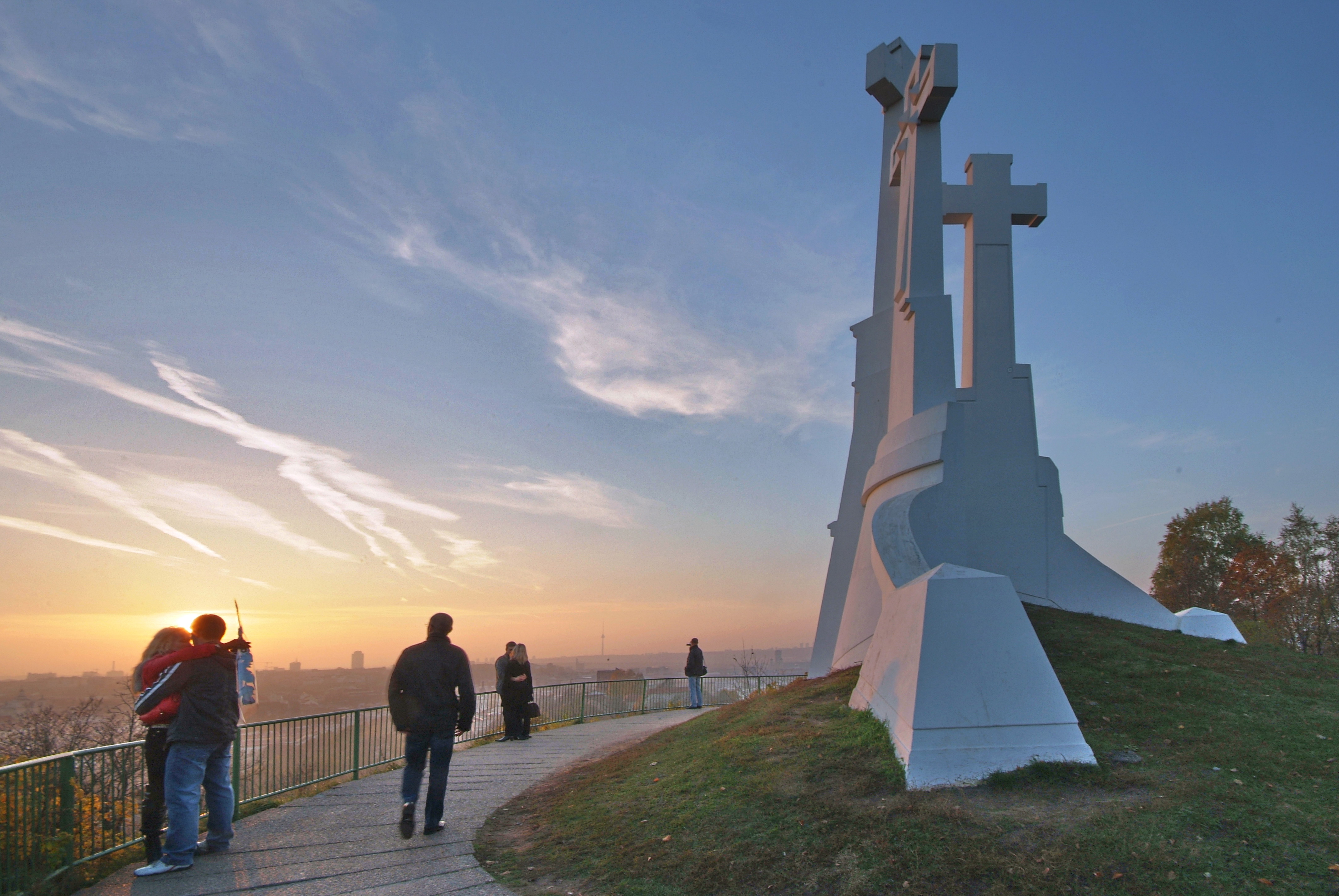 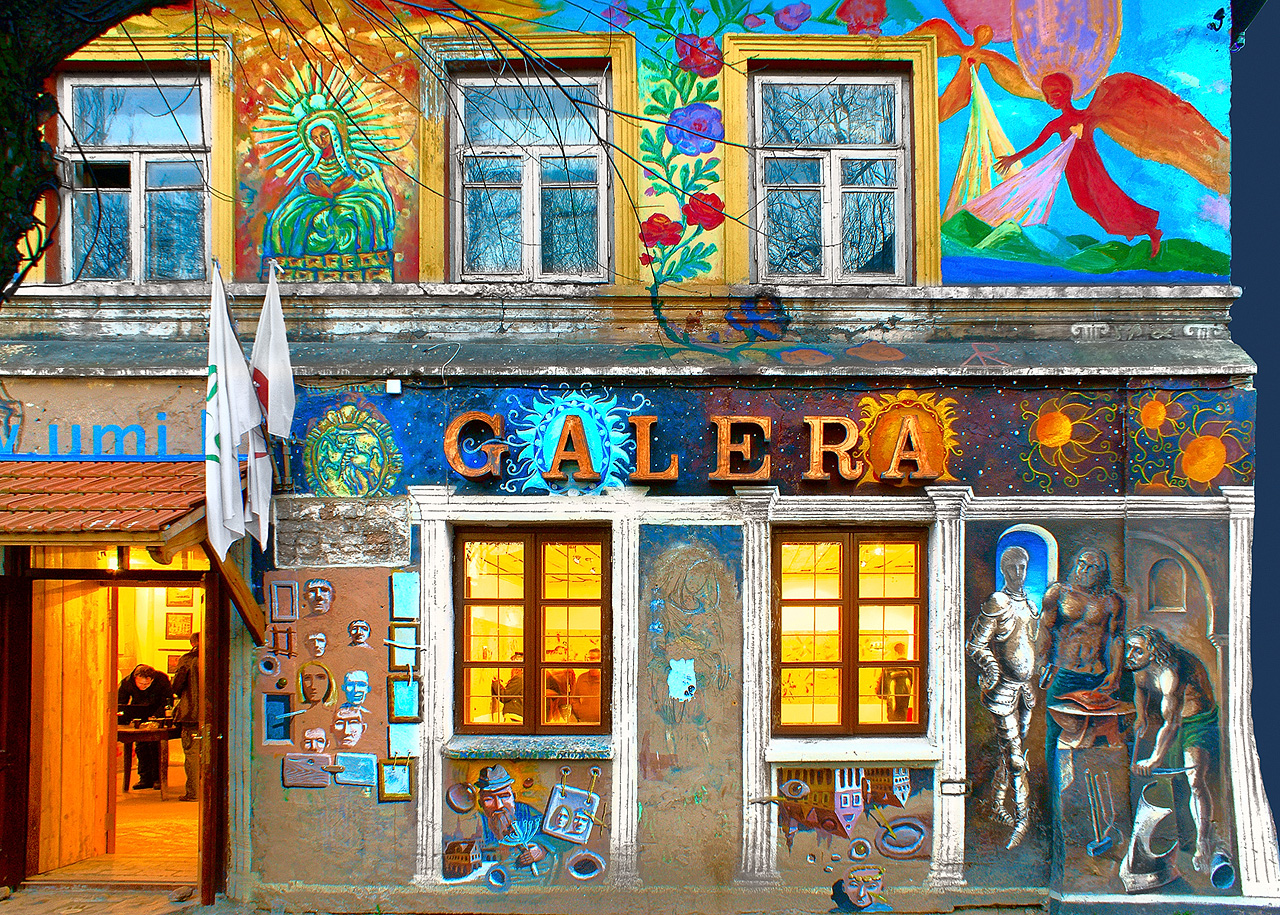 The self-proclaimed “Republic” of Užupis is Vilnius’ Bohemian and artistic district. It has its own anthem, constitution, president, bishop, two churches, the Bernadine Cemetery – one of the oldest in the city -, seven bridges, and its own guardian called The Bronze Angel of Užupis, who was put in the centre of the district in 2002.

Dating back to the 16th century, Užupis is one of Vilnius’ oldest districts and despite its current prestigious status, was formerly the city’s poorest area and home to a number of manual workers and a red light-district.

During the Soviet era, the authorities let Užupis go to ruin, and it quickly gained notoriety as the roughest districts in the city. Since Lithuania regained its independence in 1991, artists came and took advantage of the cheap accommodation, and moreover, the city’s art academy is located across the bridge from Bernadinų Gardens. Now its thriving creative community hosts regular fashion festivals, concerts, exhibitions and poetry evenings.

In Lithuanian, Užupis means ‘behind the river’ and this is proclaimed in a number of languages on its entrance sign. The Vilnelė is the district’s river, and is home to Lithuania’s only mermaid – she’s not real, don’t worry! But she lives on the embankment, and those who give in to her charms will remain in Užupis forever.

PALACE OF THE GRAND DUKES OF LITHUANIA

The reconstructed Palace of the Grand Dukes of Lithuania, the former political, diplomatic, cultural center of the State, was one of the most famous in Europe in the 15th-17th centures and was demolished in the beginning of the 19th century. This Palace is excellent located just in the heart of Vilnius, within the confines of Lower Castle. Nowadays the Gothic, Renaissance and Early Baroque halls of this multifunctional Museum are ideally applicable to organize a different size and content public events, official visits, conferences, meetings, seminars, concerts, performances, receptions and other.

Part of the reconstructed Palace of the Grand Dukes in Vilnius Lower Castle officially transferred to the Museum. In the reconstructed Palace of the Grand Dukes of Lithuania there are two exhibition tour routes directly related to the historical functions of this residence. The first tour will show the historical and architectural develop ment of the palace by highlighting the ancient ruins still in place, excavated artifacts and by using models and iconographic materials. The second tour route will bring the visitors into the ceremonial halls, which have been reconstructed in such a way as to show the evolution of architectural styles – from the late Gothic to the Renaissance to the early Baroque. 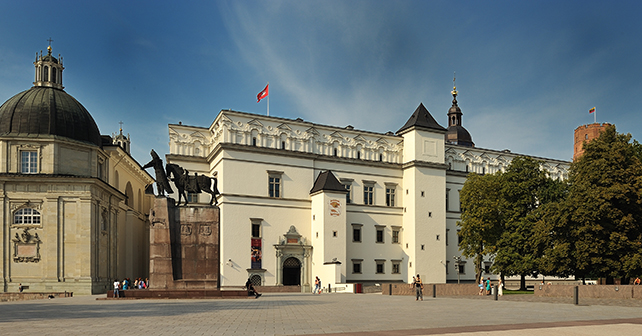 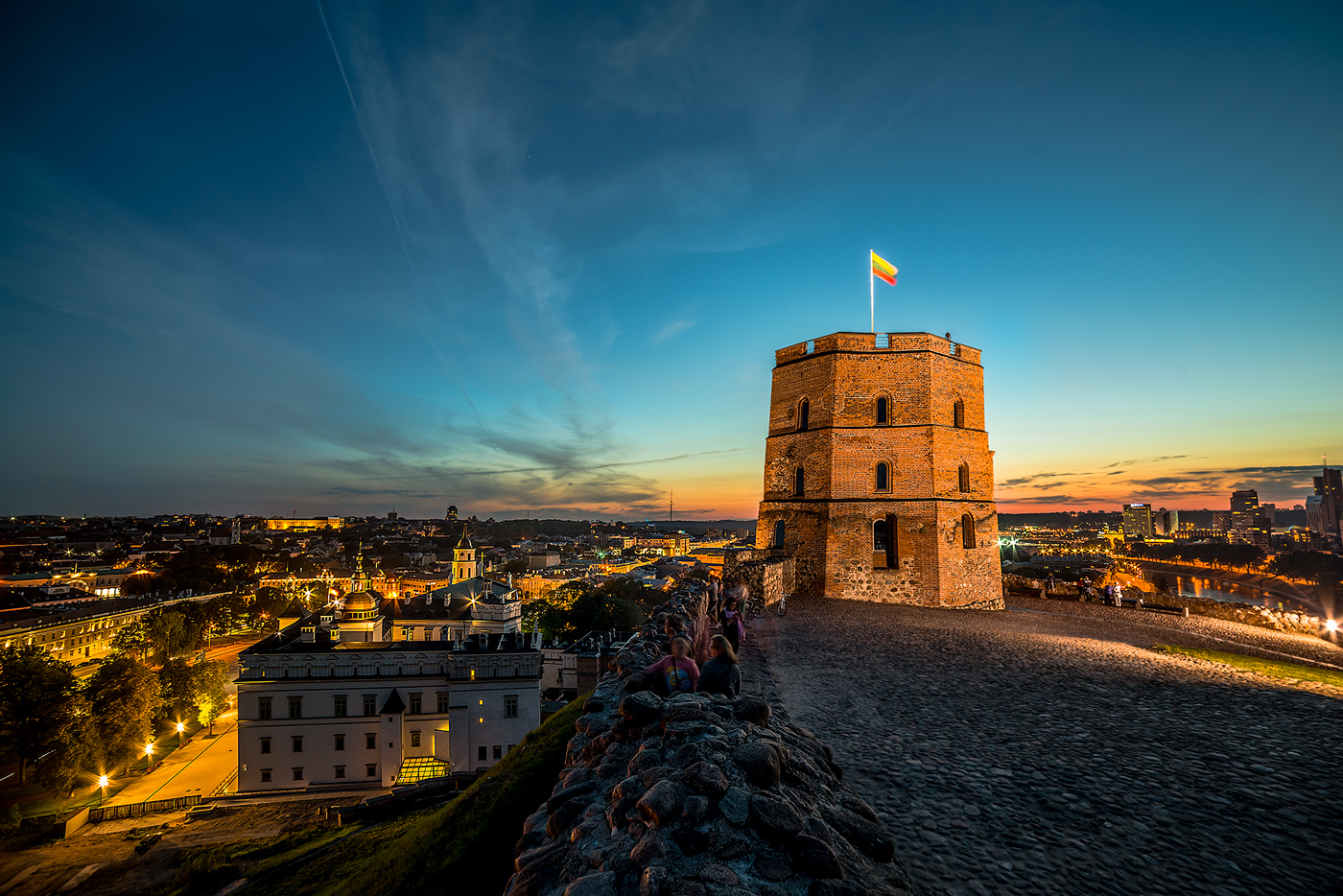 GEDIMINAS’ TOWER OF THE UPPER CASTLE

The Vilnius Castle Museum was opened in 1960, and in 1968 it became a subdivision of the Lithuanian National Museum. The exposition of the Vilnius Castle Museum displays reconstruction models of Vilnius castles of the second part of the 14th and the beginning of the 17th centuries, armament, iconographic material of old Vilnius. An observation deck on the top of the tower is the best place from which to appreciate a magnificent panorama of Vilnius

The Cathedral of St. Stanislav and St. Vladislav is the most important place of worship for Lithuania’s Catholics, and the venue for the country’s main Christian, for, and national festivities.

In 1922, the Cathedral was granted the title of ‘Basilica’, by Pope Pius XI.
Many key figures in Lithuanian history are buried in the Sovereigns’ Mausoleum, which is located beneath the chapel of St. Casimir. Its vaults contain the remains of Vytautas The Great, the Grand Duke of Lithuania, and King Alexander of Poland. The vaults are not only restricted to kings, either – the two wives of Žygimantas Augustas, Queen Elisabeth of Austria and Queen Barbora Radvilaitė. The cathedral containing the ashes of King Vladislovas Vaza (Wladyslaw Vasa) are also buried here.

The cathedral’s original temple dates back to between the 13th or 15th century.

CRYPTS OF THE VILNIUS CATHEDRAL
Opening time: Monday to Saturday 10 – 16 h. Visitors to the Cathedral crypts are admitted only with a guide, in groups of at least 10 people. 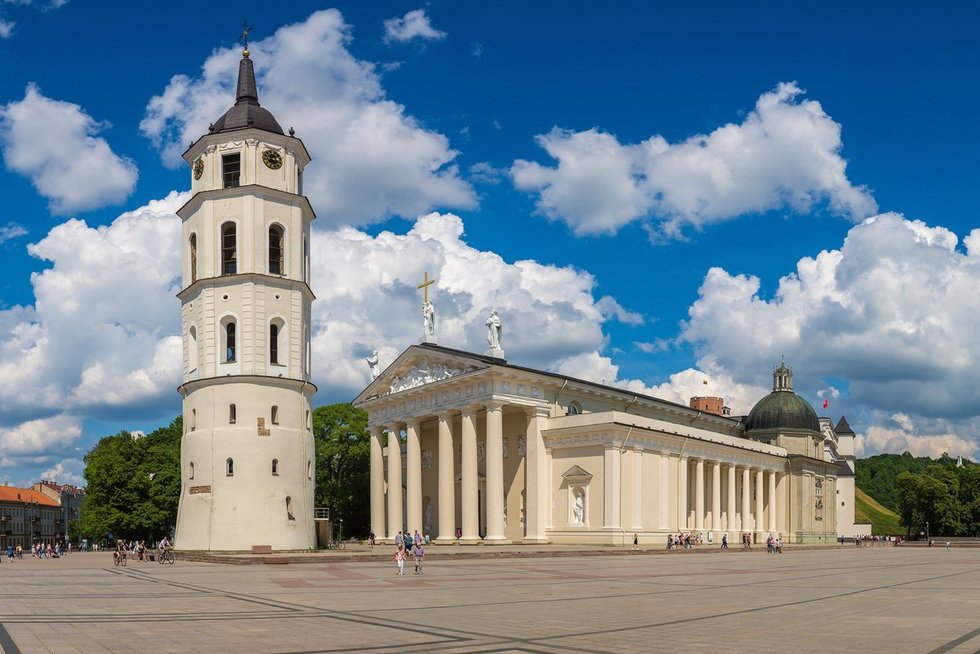 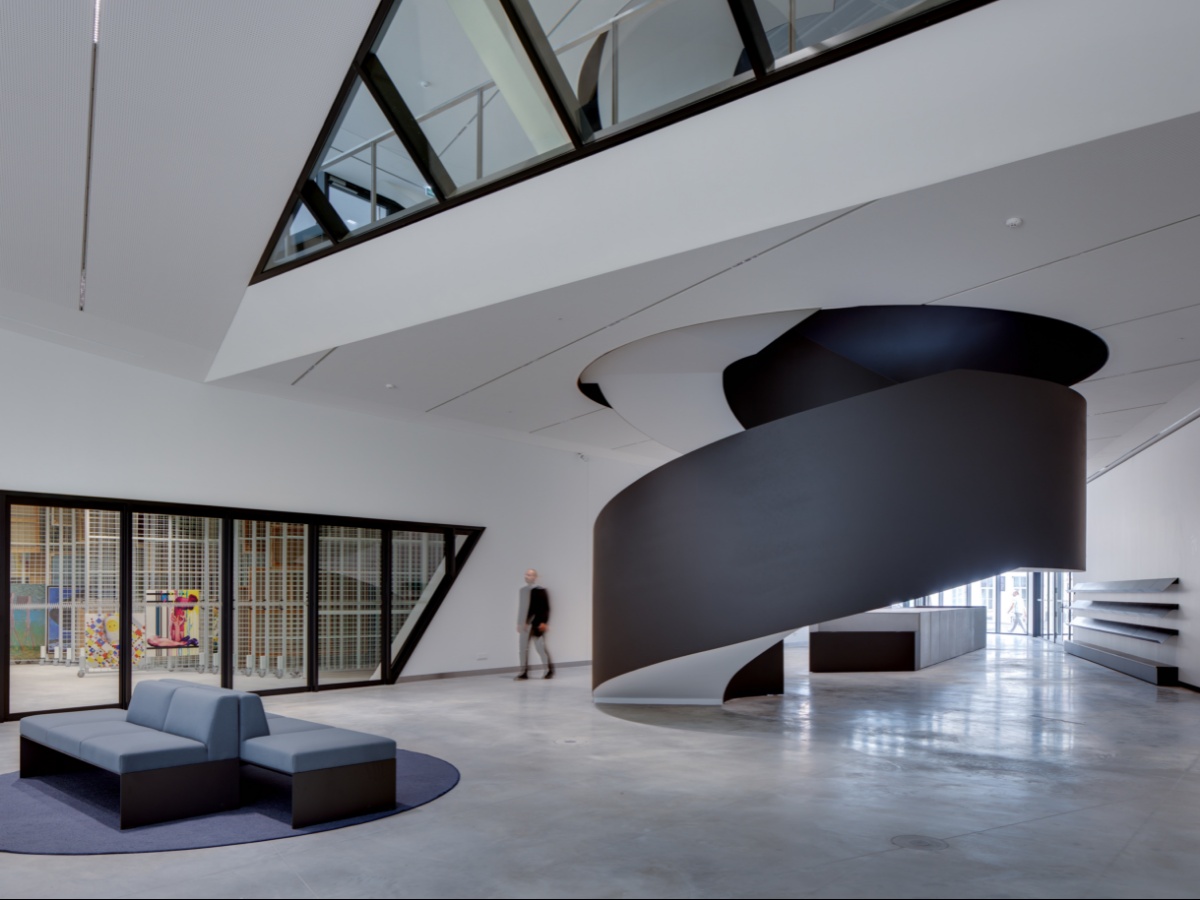 The main goal of the MO Museum is to assemble a broad, representative collection of Lithuanian art created from the 1950s to the present day. While each work in the MO Museum collection is interesting and valuable in its own right, each piece can be viewed in a new light when we learn more about the context in which it was created and the overall history of art in which each work plays a part.
The Cultural History project was born out of a desire to learn more about this context: the connections between each piece of art, the relationships shared by the artists, and the changes in and styles, and trends of our conception of art. After all, art does not appear out of a vacuum—it is surrounded by political and economic context, and within culture itself different aspects of life intertwine with and influence each other. People and ideas meet, separate, and change, each impacting the other. In order to better understand cultural development and to grasp general (or contradicting) trends, we invited contributions from specialists in various cultural fields (read more about the authors). Their published articles, and those still being written, join with a constantly updated catalogue of visual materials on the Cultural History website into one polyphonic archive of knowledge.
We use cookies to ensure that we give you the best experience on our website. If you continue to use this site we will assume that you are happy with it.Ok